Looking at the chart below, you can plainly see the major consolidative pattern that the Japanese Yen futures has carved out over the past 6 months. Last week, the market finally broke out of its consolidation to the downside – in a very similar fashion to its breakout in the latter part of 2013. Technically, we would favor the market to initially target the early April lows near the 96.00 level, with an eventual test of the late December lows near 95.00. 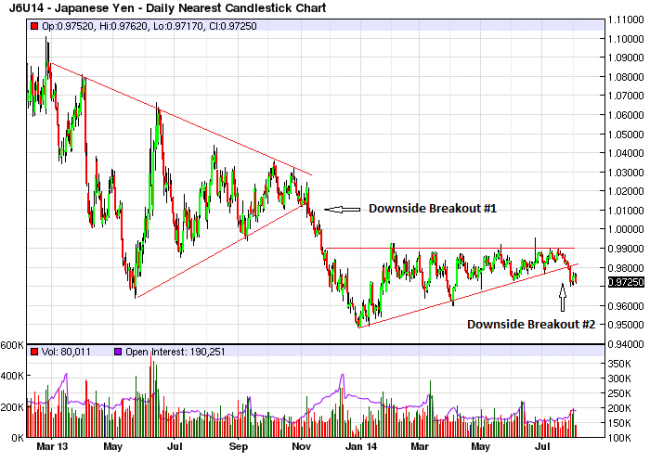 In addition to the technical argument for the Yen to move lower, traders should also take into account when this recent breakout occurred. The Yen has historically been a “safe-haven” destination for funds being moved out of what many would consider “riskier” assets – such as stocks. So, the historical relationship with equity markets is an inverse one – meaning that the Yen typically rallies when we see weakness in the equity markets.

The front month E-mini S&P 500 closed last Friday at 1918.50, down 53.00 points on the week and capping off its worst Monday-Friday stretch since 2012. If a trader or investor was told that information in a vacuum, most would certainly think that if there were to be a breakout in the Yen during that same timeframe that the breakout would be to the upside, not the downside. The inability for the Japanese Yen futures to rally in a week where the sentiment in the markets seemed to be one of the “risk-off” variety should cause those bullish the Yen to take pause.

Additionally, the Bank of Japan has a scheduled press conference for later this week. Although the statement could end up being a relative non-event, we feel that the risk is with the communication being more dovish than hawkish. Given the fact that we have a major event that could move the market at the end of the week, bearish traders may want to implement an option strategy as a way to mitigate the risk versus going short an outright futures contract.

Questions or comments? Contact Trent directly at 312-756-0932 or at twagner@tradewithfox.com. Trent can be seen as a regular contributor on Fox Business and is the author of a newsletter, The Weekly Options Trading Report. For a free trial of the newsletter, click on the link below:

*Past performance is not indicative of future performance. Trading futures and options involves substantial risk of loss and is not suitable for all investors.

Futures trading involves risk of loss and is not appropriate for all investors.
Copyright © 2022 FuturesOptionsXecution.com