Watch For A Breakout In August Gold

It’s been a wild ride for Gold over the first half of the year to say the least.  Since making lows for the year near $1180/oz in late June, the Aug Gold futures contract has rallied over $100/oz during the month of July.  Although the market has tested the $1300/oz level a few times since last week, it has been unable to breakthrough this resistance level.  In addition, we’ve seen the market trade in a much tighter range over the past week as it has tested resistance, carving out an ascending triangle formation (see chart below) in the process.  The chances of gold continuing to trade in this range are slim and none in my opinion, given the volatile nature of the price action over the first half of the year.  So, if the market does breakout, which way is it going to go?

The overall trend in Gold certainly remains down and, as such, I tend to favor a downside bias for this potential breakout.  To be fair, ascending triangle formations that are carved out in the midst of downtrends are typically considered bullish technical signals.  However, in the event that resistance holds in these situations, it has been my experience that markets breaking out to the downside of these formations typically will drop approximately by the height of the triangle.  In this case, that would translate to the Aug Gold futures testing the aforementioned lows established in late June.  Also something to consider, the 50-day moving average has proved to be the proverbial line in the sand for gold bears since the market broke through it to the downside in October of last year.  If the 50-day MA continues to hold, the potential reward of an upside breakout would be relatively small compared to the downside potential on the chart. 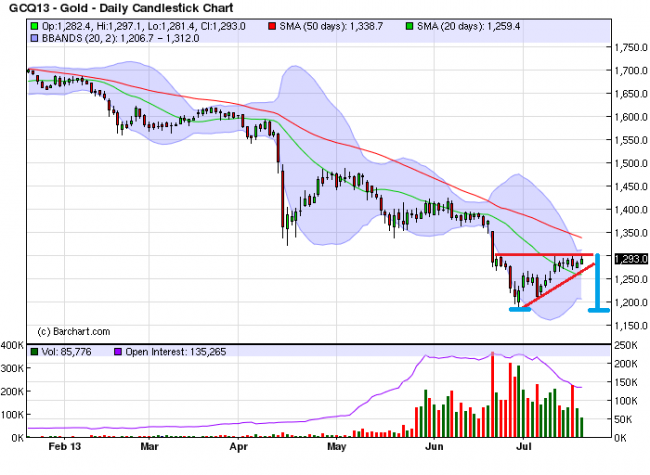 Fundamentally, the recent leg up in gold was fueled by the market’s dovish interpretation to Bernanke’s press conference earlier this month.  Specifically, his statement regarding the Fed defending their inflation target of 2% through easy monetary policy was most likely the biggest contributor to the rise in gold this month.  Despite the inflation target of 2% and the extremely accommodative nature of the Fed’s monetary policy over the past few years, the economy right now is showing no signs of inflationary pressures – which is one of the staples of the argument for gold to trade higher.  That’s not to say that inflation in our economy will not increase eventually as a result of the grossly increased monetary base, but we are not there yet.  Even though gold has given back much of its parabolic gain from 2008-2010, its still trading at levels with a healthy amount of inflationary pressures priced in.  Because of this, I think the market is susceptible to another leg down before the end of the year.

Questions or comments?  Contact Trent directly at 312-756-0932 or at twagner@foxecution.com.

*Past performance is not indicative of future performance.  Trading futures and options involves substantial risk of loss and is not suitable for all investors.

Futures trading involves risk of loss and is not appropriate for all investors.
Copyright © 2022 FuturesOptionsXecution.com